Canoes have been used for some thousands of years already. Archeologists have discovered, not too long ago, remains of dugout canoes that date back at least 8,000 years, although we can’t say for sure how old these types of boats have been used. What we can say for sure is that yes, they are part of the tools used by people for much longer than we previously thought.

Kayaks on the other hand, are known to have popped up a lot closer to our times, somewhere around 4,000 years ago. Both of these types of boats are known as great pieces of equipment for people that like fishing or recreational paddling as a form of exercise.

These two types of boats look so alike that most inexperienced people won’t be able to tell the difference. And out of them, the sit-inside kayaks resemble the most to canoes. But let’s take a quick look at what sets these two apart. What are the differences and similarities that differentiate kayaks from canoes and why would you choose one over the other?

The canoes and Kayaks have several differences and similarities between them. Below you will find the ones that stand out the most:

Their design is very much different

Although this is one of their main differences, it is also one of the closest similarities between these two boats. As a general rule, canoes are considerably larger than kayaks. They are built similarly to sit-on-top kayaks, with open tops and wide frames. What sets them apart from kayaks is the fact that canoes are made to carry both more gear and more people. Kayaks, on the other hand, are much sleeker and offer more limited space.

You might also like my articles on differences between cigar boats and cigarette boats, and the pros and cons of wrappying a boat in vinyl.

There are multiple types of canoes available but out of all of them, the most common ones are the recreational types, also called the “Canadian” canoes. These boats will usually have enough space inside for a paddler to kneel on slats or sit on benches that run the width of the beam, sit considerably higher on the water than kayaks, and will usually be 13 to 17 feet in length.

Not all kayaks will have an open top, but canoes will always have this feature. Although there are some kayaks that are sit-on-top with an open-top, the kayaks you can sit inside are actually the ones that will resemble a canoe the most. One of the most visible differences is that when it comes to kayaks, a paddler will have to sit inside the enclosed cockpit.

A simple way of putting it is that you would actually “wear” a kayak of the sit-inside type while in the case of a canoe, you would ride it instead.

The Way You’re Getting Into the Boat

When it comes to a kayak on the other hand, you will need quite the technique and skill to get inside. You will have to make sure you keep your balance and also keep the boat from tipping over, while carefully sliding the legs inside the cockpit. Canoe users will also need balance, but keeping it on the vessel will be a lot easier than getting the balance needed to get inside the kayak.

But even so, as soon as you manage to get inside, there comes a different argument, about the comfort that a kayak is able to provide. This is why most of the kayaks are not only very comfortable, but will also come equipped with very comfortable seats, some of them even having backrests. Canoes are a whole different story. They can’t be called luxury boats. They are made of an open space and if you’re lucky, maybe some benches. 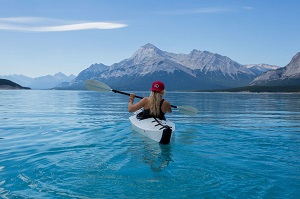 This is where a difference can really be seen. It will usually take considerably less effort to paddle a kayak than it takes to do it in a canoe, as kayaks are almost always lighter and less bulky. What’s more interesting is that you will usually need two people to paddle a canoe, while you can usually paddle a kayak alone. This is because the paddles of a canoe are shorter and have a single blade, while those of a kayak are longer and with two blades.

The usual paddle used for a canoe will have a blade at the bottom and a “T” know at its top. When using it, you will help a hand in the middle and the other one on the T knob. To proper the canoe, you will have to push the paddle down with both of your hands.

When it comes to tracking a canoe straight, you will have to do this on both sides of the boat, alternatively. If not, then two paddling partners will have to do this, on alternate strokes. This synchronization is surely not something as easy as you think.

Paddling a kayak is surely less of a headache. The paddles of the kayak has two blades and the boat itself isn’t usually as bulky or as wide as a canoe. To paddle it, all you will have to do is pick a paddle with both your hands, two feet apart, and then just dip the blades alternatively in the water.

So is a Canoe or Kayak Better?

These two types of vessels offer very similar services so deciding which one is better will usually come down to personal biases of each. To help you decide, I`ll be going over the pros and cons of both of them.

Pros of a Kayak

Cons of a Kayak

Pros of a Canoe

Cons of a Canoe

Choosing Between a Canoe and a Kayak

First off, ask yourself what is more important for you. You need more speed? Then you should go for a kayak.

Are you the type of person to paddle leisurely around a lake while bringing more gear with you? Then a canoe is better for your needs.

Although both boats can serve you well, it will come down to your actual needs.