Just like when driving a car on the road, when in water with your boat, if you want to stay as safe as possible, you should know the right of way when two boats meet. You might know whether it is the starboard or the port vessel, but are you sure they know this information as well? Although rules are pretty straightforward, a lot of people will go out on the water without boating knowledge or a real license, which is why it is very important that you are careful even when you know it is your turn to pass.

If you want a very simple way of remembering which boat will have the right to pass, the generalized rule of thumb that everyone follows when it comes to power boating navigation is that you’ll basically treat your power boat as a car while driving in the US.

Although these are the most basic of several rules boaters will have to follow while navigating, as long as you know just this information, you are still ahead of a lot of people that are out on the water doing power boating for pleasure and fun. You might find it scary but, although you might know the rules of giving and accepting the right of way, there is still a strong collision potential, just like cars get into car crashes every day.

So Why Use Port And Starboard Instead of Left And Right?

A lot of boaters will choose to use right and left because they have no idea which side is starboard and which one is the port. It also sounds really snobbish for someone to use nautical terms between people with no nautical knowledge when Right and Left are universally recognized.

People have an easier way of remembering which side has what name when remembering that Port has the same number of letters as Left. And of course, Starboard will have to be the other side of the boat, which is Right. 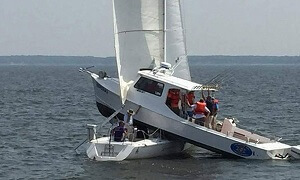 It’s a similar issue that people using CB radios had in the past. They were using secret language to communicate, which was goofy enough that only they knew what they were talking about most of the time. It was their own secret club where they could talk in a way that only other members would understand. Although all of their goofy terms had a more normal version that most people would understand, why would they speak like normal people when they could just have their own weird terms?

So this got me wondering who started with this weird way of talking and naming sides of the boat with nautical terms, and I dug deep enough to find out. It turns out that right and left were really too confusing because nobody established that you will have to be in a boat and face forward to know which one is right and which one is left.

So what they did as a solution was to simply label the sides of the boat as starboard and port, so regardless of the way you are watching, these locations are fixed on your vessel and don’t refer to a direction. Below I will give a simpler explanation of what my research into these nautical terms led to.

In the past, ships didn’t have that fixed rubber right in the middle of the stern, which is why sailors used a type of oar that was held over the stern of their vessel. The proportion of right-handed sailors was considerably bigger, which is why the oar was placed more on the right, which is the starboard of the rear of the boat, which was the stern.

This is why they began to call that side of the boat the steering side, which over time transformed into the starboard. Starboard basically came from the combination of stéor which means “steer” and bord which means the boat’s side in old English.

The docking of the vessel was also easier on the left side, which was the port side because of the steering characteristics of where the oar was placed. This side used for docking was called a Larboard. The problem was that Larboard was a term that got easily confused with Starboard, which is why they called it the Port side. It was called this way both because it was used to dock in the port and because it was the side loaders would use to load goods, and loaders were called porters.

All of this information and the origin of these terms is very interesting but what you should remember is that regardless of whether you are talking about a boat, a plane, or a car, if you want to figure out which one is Right and which one is Left, just consider the Right and Left sides when inside it and facing forward. Keep in mind that most people will still use Right and Left when talking about boats and navigation. It’s easier than trying to explain Starboard and Port to people that have never heard of this term.

Giving The Right Of Way To Another Boat

If you want to make sure that you, along with all the passengers on your boat will stay safe, you should assume that none of the other boats know the rules of navigation. Most of the time you would be correct.

Of course, it is always better to boat in a larger space that doesn’t have a lot of boats. Of course, due to how many people take on boating yearly, you are bound to be in the water with many other boaters and the best thing you can do is to just assume that the other vessel approaching you doesn’t know the navigation rules, so you will be in charge of keeping steering to the right, or starboard, to make sure you keep the safe distance between your boat and his as you pass one another.

There are some inland lakes that are packed with boats. It’s like navigating in an ant colony. You will be surrounded by boats coming from every possible direction, which is why you will always have to pay attention to what’s coming and what’s going.

Keep in mind that you will have to be very focused even when entertaining guests on the water. You will basically only be able to socialize when you’re either docked, at anchor, or in a No Wake zone.

Even when you have the right or way, or as professional navigators call it, you are the “stand-on boat”, it’s a great idea to be prepared to let the other boat pass. Always assume the worst when it comes to boats approaching you.

And the fact that most boaters that do this for fun don’t know navigational rules when boating is not even the worst. There’s also a lot of drinking and driving involved with water travelers. This means that you have yet another reason to be careful when boating especially in busy and tourist-filled areas. 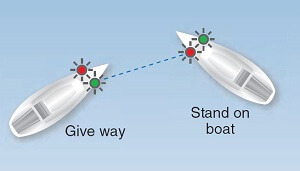 If you’ve landed on this site, then you’re a power boater just like me. When it comes to the types of boats that cross paths, the rules are slightly different. Below you will find some of the more common scenarios.

It will get easier for you to know who should give right of way as soon as the sun goes down and it gets darker outside. Try to look for boats’ navigation lights when you approach them. Red means that the other craft will have the right of way. You will have right of way when you see green, just like on road traffic. So green means you are given right of way, so basically “Go”, while red will means you have to give way, which is basically “Stop”.

There will come a time when you are getting close to a boat during the night and you notice that it only has a white light on. This means that you are seeing the stern of the boat. When passing port side or starboard, make sure you sound your horn two times and then steer very clear. Keep in mind that you will only make sure it is safe or not to pass when you get a reply from them. If they respond with five short blasts, then there is a reason for danger. They may not respond at all and that’s fine, just keep safe.

The official US Coast Guard has all of the navigation rules on its website so you can always read what they have to say on their official website if you want to dive deeper into these rules and regulations.

Staying informed and up to date with any changes is always the way to keep you, as well as your boating guests safe. Of course, these rules and regulations will be a lot harder to understand if you’re not on top of the boating terminology and any operational and mechanical knowledge about your particular boat and some of the usual boats you cross paths with.

It might also help you to just bookmark BoatinGuru and also go throughout other articles to get an understanding of how to begin your boating adventure and what boat would be suitable for you.